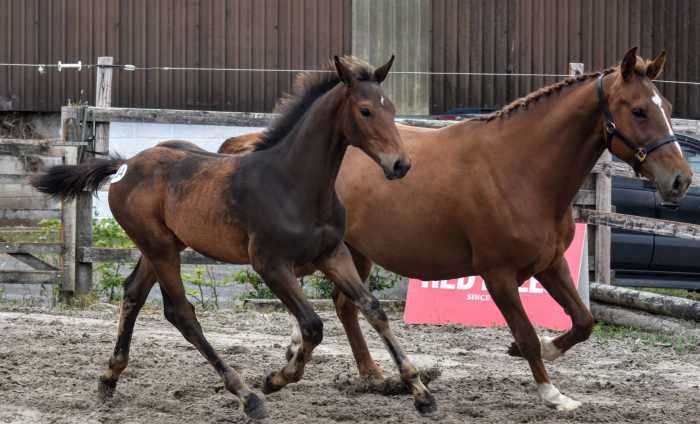 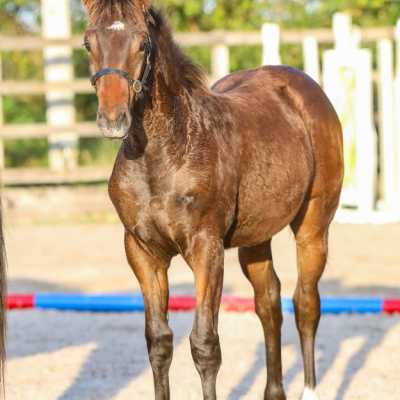 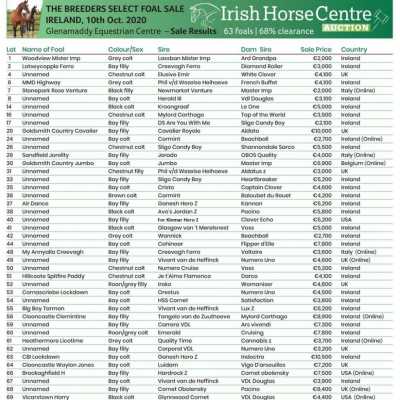 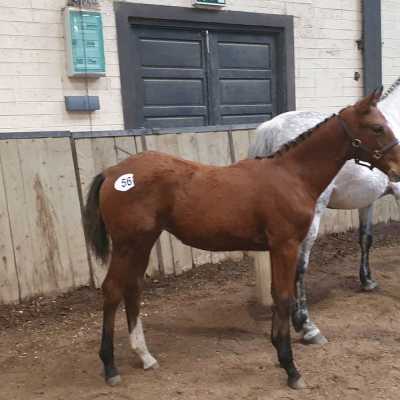 In total 43 foals were sold from the Mayo Roscommon Breeders Group based in the West of Ireland, to purchasers as far a field as the USA, UK, Belgium and Italy.

Purchasers were spoilt for choice with the exceptional bloodlines on both the sire’s and dam’s sires of the foals.  Emerald who competed at the 2016 Rio Olympics and has had outstanding support for his progeny across Europe this year at auction was well represented by a grey colt out of a Cruising mare who sold for €7,800.  Bred by Gerry Lynch this beautifully bred show-jumping foal was sold to John O’Sullivan and will remain in Ireland following the sale.

Jumbo, the sire of Rolex Grand Slam winner Headley Britannia and three-time Burghley winner Avebury ridden by Andrew Nicholson, was represented by a stunning dark bay colt called Goldsmith Country Jumbo out of a Master Imp mare bred by Aidan Flanagan.  The successful buyer was Lieven Tsjoen an online bidder from Belgium who secured this striking three-day eventing prospect for €6,900. The Jumbo foal will remain in Ireland and will be contract reared in the West of Ireland at the Mayo Roscommon Breeders Group's young horse rearing facilities until it's 3 years old and ready to enter the sport. Several National and International clients have availed of this service provided by the group this year.

Cornet Obolensky who is currently the number 5 sire in the world under the Rolex WBFSH Rankings was represented by a bay filly out of a Pacino mare bred by Maria Griffin. The filly was sold to Ash Sporthorses in the UK via an internet bid for €8,400.

It was no surprise that the only Cavalier Royale foal born in the world this year made the second priced top lot of the sale and was sold for €10,000 to The Browne Family in County Tyrone, Ireland. This filly who bares a striking resemblance to both of Mary King's former CCI5* rides Call Again Cavalier and Imperial Cavalier, was also bred by Aidan Flanagan.

The top-priced lot of the sale was the bay colt CBI Lockdown by Ganesh Hero Z out of an Indoctro mare.  Ganesh Hero Z is by the full thoroughbred Gemini CL who is one of the clones of Gem Twist and out of a Diamant De Semilly mare.   With Toledo De Kerser a son of Diamant De Semilly taking the podium at Pau CCI5* last year this couldn’t have been a more fashionably bred foal for the sport of showjumping. The winning bid of €10,500 was made by Damien Griffin in Ireland

John Murphy of Clooncastle Stud  (Mayo Roscommon Breeders Group member and co.founder of the Breeders Select Foal Sale Ireland) also achieved the 3rd highest price on the day for Lot 56 a bay filly by Tangelo Van De Zuuthoeve out of the Mylord Carthago mare closed with a hammer price of 8900 euro sold online to Shane Kenny and will stay in Ireland.

Strategy, planning, and action steps towards an end goal.

This was also a significant result for the group as they collectively identified during the Department of Agriculture’s Equine Knowledge Transfer program 2016-2019 that marketing of their stock and upgrading the quality of the mares needed to improve leading towards more commercial viability of their breeding programs. This is now evident from the implementation of a clear strategy and plan by the group which has led to the growth of Edition 3 and the results of its breeders in the sale.

The sale has received very positive feedback from both buyers and producers of sport horses around the globe.

‘We just want to say a huge thanks to all of the Mayo Roscommon breeders’ group for providing us with such a wonderful platform to sell our foals. There was a great line up of buyers in attendance, both in-person and online! The new incentive of online sales and the standard of advertising material produced must be commended as well as the group's professional and helpful approach. Onwards and upwards for you guys, we are already looking forward to next year already’

With almost 1000 registered users to date, the sale is sure to attract even greater attention next year if it continues to offer the same proven international jumping and eventing bloodlines. PWEB Solutions provided a very successful online auction platform which attracted 11 successful online bids which accounted for 26% of the total buyers coming from the platform. The platform is the same platform as used by The Billy Stud and Zangersheide.